For improving the efficiency of verification man-hours by quantifying the test environment, long-run (aging) tests, and automating tests.

It simulates the attenuation process of radio wave in which the communication of mobile terminal transfers from base station A to base station B. 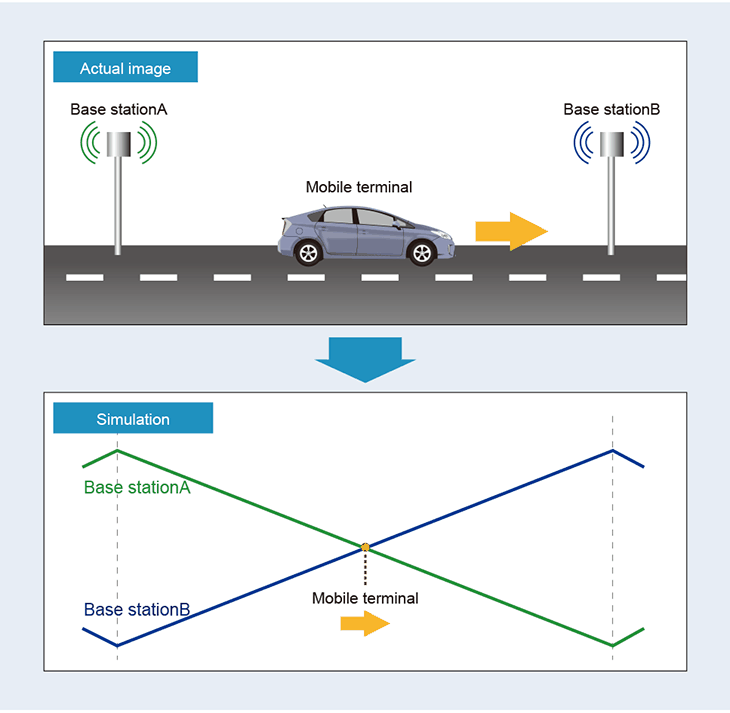 *Since MH3800 only simulates the communication environment, the evaluation of actual communication quality such as throughput measurement and packet capture needs an evaluation software such as iperf and Wireshark.

The strength of the radio wave when the mobile terminal moves closer or farther towards multiple base stations or access points can be simulated, and then the handover is caused.

The attenuation scenario can be synchronously controlled up to 64 channels.

The attenuation amount according to the distance to the cell can be switched continuously and without 1/4 interruption.

The high-speed programmable attenuator MAT 800/810 is an electronic variable attenuator and has a very fast switching speed of 2 μs. Therefore it can simulate the transient phenomena such as shadowing.

By automating the repetitive tests in the same scenario, the efficiency and time of test will be improved.

A continuous durability test in day and night can be also done by uninhabited.

If it is used within the frequency range from 300 MHz to 12.5 GHz, there is no need to worry about communication standards. The equipment doesn’t become obsolete, and also is excellent in versatility and scalability.

Moreover, the attenuation data during executing scenario can be monitored.

Applied frequency : 300MHz to 12.5GHz (depend on the model of programmable attenuator)