Total test system including not only antenna, spectrum analyzer for EMI, LISN and PC software for EMI but also anechoic box.

What can be done?

Two kinds of EMI tests can be carried out.

The source of noise can be found.

As a complete and total test system including not only antenna, spectrum analyzer for EMI, LISN and PC software for EMI but also anechoic box, MR2300 is the first in the world.

In addition, the magnetic field probe (option) is prepared as a problem solution tool.

Compact and broadband antenna by our own development. 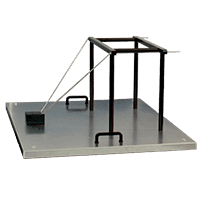 The size of anechoic box also became small by miniaturizing the antenna.

Calibration of the entire system

The calibration as the whole system like corrections of the antenna gain, attenuation of LISN and conversion into 3 meters in measurement distance is performed in Spectrum analyzer and PC software.
The user only reads the measurement result on the PC screen as it is.

Confirmity to regional and international standards

When ①, ② or ③ in the whole system chart shown above is connected to ＜About magnetic field probe CP-2SA＞ [RF INPUT] of Spectrum analyzer MSA438E/538E/558E for EMI, the radiated emission test, the conducted emission test or debugging to remove the source of disturbance noise respectively can be performed.
*PC and CP-2SA are not included in the system price.

After receiving the disturbance noise that EUT (Equipment under test) radiates in the air with broadband antenna MAN101/102, it is input to MSA438E/538E/558E. The antenna gain of MAN101/102 is corrected and the electric field strength (dBμV/m) is calculated in MSA438E/538E/558E.

The calculation result is displayed with the limit line by the EMI standard on the screen of a personal computer after forwarded there through the USB cable MI400 communication and converted into 3 meters in measurement distance.

By inserting an accessory N(J)/BNC(P) coaxial adaptor in the [RF OUT] terminal of LISN(MPW201B) and then connecting to MSA438E/538E/558E with N(P-P) coaxial cable, the conducted emission test is done within 150kHz to 30MHz.

The disturbance noise that EUT discharges into the power supply line is input to MSA438E/538E/558E through LISN. The attenuation of LISN is corrected and the noise is converted into the unit of dBμV in MSA438E/538E/558E.

The data is displayed with the limit line by the EMI standard on the screen of a personal computer after forwarded there through the USB cable MI400 communication.

Search of the source of disturbance noise

As a result, it is very convenient as a debugging tool because the source of disturbance noise that exceeds the limit line can be easily found out.