As for the EMI test, it is evaluated whether the radiated emission or the conducted emission discharged from EUT (Equipment Under Test) exceeds the limit value set beforehand.

This test is generally done at the formal EMI test site equipped with the anechoic chamber. It seems to be actual that much waiting time and cost are needed there and longer time and more cost are wasted there when it is repeated many times to solve the problem and to test formally.

The EMI total test system MR2300, which focuces on being used to solve the problem in advance ≪Precompliance≫ and reducing the number of times of formal test to one or two times, is introduced in this site.

MR2300 is a complete and total test system including not only a compact broadband antenna, a spectrum analyzer for EMI, LISN and PC software for EMI but also an anechoic box.

The system configuration of MR2300 is shown in Fig.1.

This system can do

Moreover, the measurement values on the screen of a computer can be directly read because Spectrum analyzer for EMI MSA338E and PC software MAS230 correct the frequency characteristics of the antenna gain, the conversion into 3 meters in measurement distance and the attenuation of LISN.

Therefore, the user can easily do the EMI test. 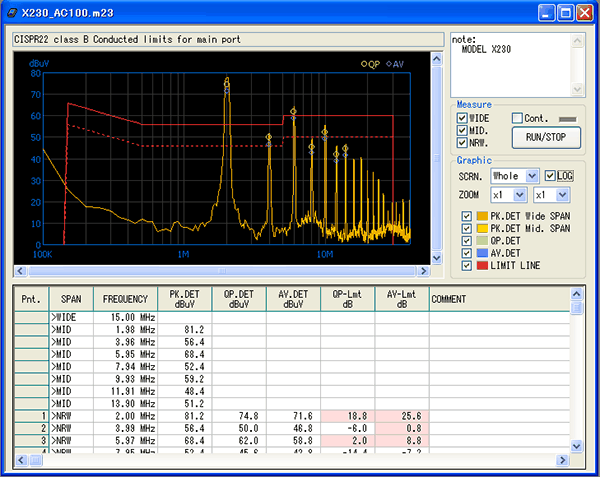 A few important points about the measurement are described as follows as an example of the radiated emission test of a keyless entry of a car.

1. Installation of EUT into anechoic box

The installation requirement of EUT in the anechoic box MY5310 is shown in Fig.3.

The noise in all directions radiated from EUT cannot be detected with the broadband antenna MAN101.

The detection of the radiated noise of the component based on the following conditions becomes possible.

In short, only the noise being radiated from the circle mark in Fig.3 can be measured and evaluated.

Fig.2 PC software MAS230 The EUT as an example is put on the styrene foam that is non-conductive as shown in Photo 1 because the size is small and the position put is lower than the ground plate.

The position in which the radiated noise becomes maximum is found by rotating the knob for turntable by hand power.

In addition, regarding the horizontal polarization component, the measurement should be done by rotating EUT because the antenna cannot be moved. 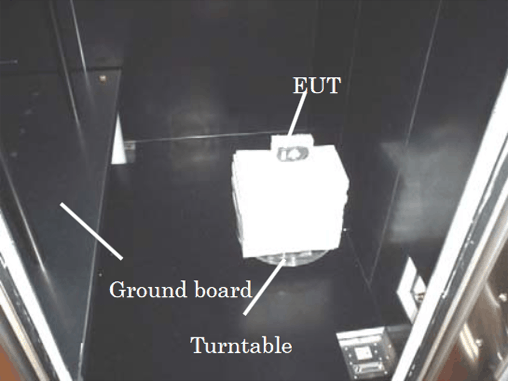 The EMI measurement can be easily done only by clicking RUN/STOP in the automatic measurement mode because the parameters recommended are set in Spectrum analyzer MSA338E and PC software MAS230 beforehand.

The frequency span is divided into three bands of Wide, Middle and Narrow for shortening the measurement time in this software.

The measurement result of EUT is shown in Fig.4. The noise out of specification is displayed on the screen as the numeric data with the spectrum waveform.

The measurement result shown in Fig.4 is by the automatic measurement but PC software also has the manual measurement mode. This mode is very convenient for debugging EUT and removing the disturbance noise.

Table1 Advantages and disadvantages of MR2300

Fig.5 and Fig.6 show the result of measuring the noise, which is radiated from CNE (Comparison Noise Emitter) widely used for the calibration of anechoic chamber, in the anechoic chamber and in the MR2300.

The measurement result in MR2300 was almost the same as in the anechoic chamber as judged from Fig.5 and Fig.6 although there is a physical restriction in MR2300 because broadband antenna, anechoic box, spectrum analyzer and PC software have been developed overall.

As explained in this paper, the EUT may pass the formal test by one time if the sufficient check is done by MR2300 system in advance. Moreover, even if the EUT fails in the formal test, the problem will be solved in a short time by using MR2300 and the result of the formal test.

In conclusion, the development cost and time can be greatly reduced by using the EMI total test system MR2300 well as a debugging tool to solve the noise problem.

Date comparison between MR2300/MY5410 system and a formal EMI site

Near field and far field

Near field and far field