Any phase-modulated signal can be output.

Currently, the wireless communication is widely used even in consumer electronics products as well as in mobile phone and digital terrestrial TV. As the handling amount of data is increasing, the modulation method has been also improved. The phase modulation is a mainstream now.
How a phase-modulated signal is output from MSG703 will be described in this paper.

The IQ modulator MIQ700 which is an option of MSG703 series is explained below. 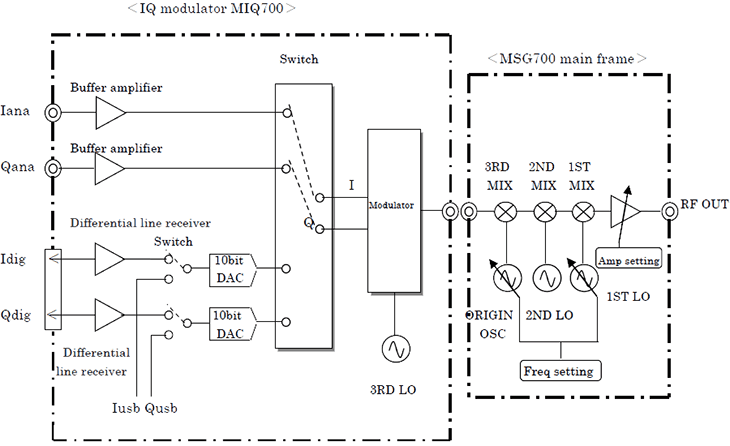 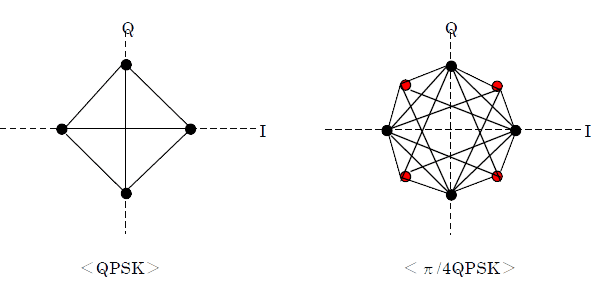 First, the IQ signal, which is supplied to IQ modulator MIQ700, should be generated.
This time, how to generate IQ signal will be described based on ARIB STD-T75 (DSRC standard) which is used in ETC2.0.
The circuit of block diagram described in next section can be easily realized by using FPGA (field programmable gate array). Analog input [Iana, Qana] or digital input [Idig, Qdig] is input to IQ modulator MIQ700.
Then, π/4QPSK signal can be output from RF OUT connector of MSG703.

The differential encoding will be concretely described using actual numbers. 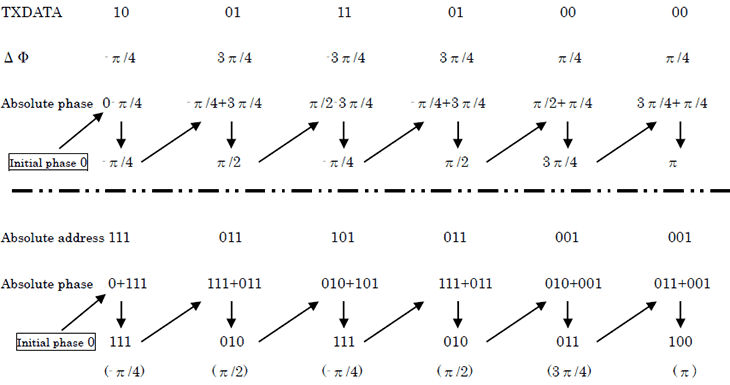 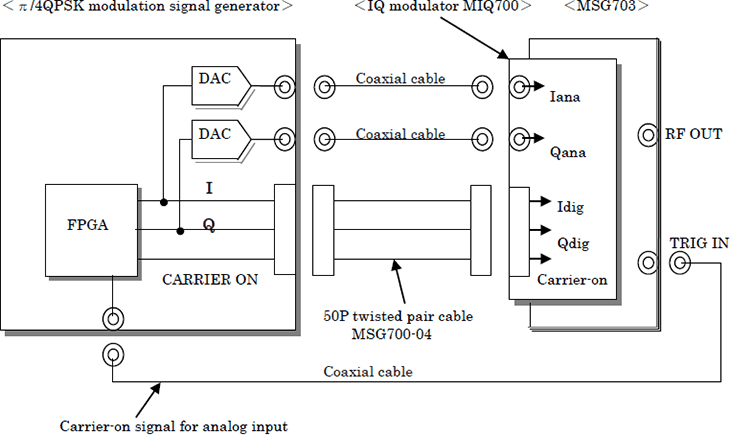 In general, on communication system, data is divided into slot and then sent. The period between slot and slot will be the carrier-off state. In short, it will be a burst signal. In general, the period of carrier-off will be in receiving state.
MSG703 can perform the burst control for analog input and digital input.
In case of analog input, “Carrier on signal” is input from “TRIG IN” connector on the front panel. In case of digital input, one pin in the digital input connector (but, differential input) is assigned to “CARRIER ON”.

On the other hand, the modulation depth is calculated by the following equation.

Without using hardware as described in “Generation of π/4 QPSK modulation signal”, the method of generating easily modulation signal is described below. It’ll be achieved by calculating the generating method described in this item on PC (personal computer). The modulation data created on PC is stored in USB memory, and then this USB memory is inserted into “USB A plug” on the front panel of MSG703.
“IQ input signal” of MSG703 is set to “LIST data”.
If the career-off state is necessary, IQ data in USB memory should be set to I = Q = 0. Relation between noise floor of spectrum analyzer and internal ATT